A look back at a full summer at Huss 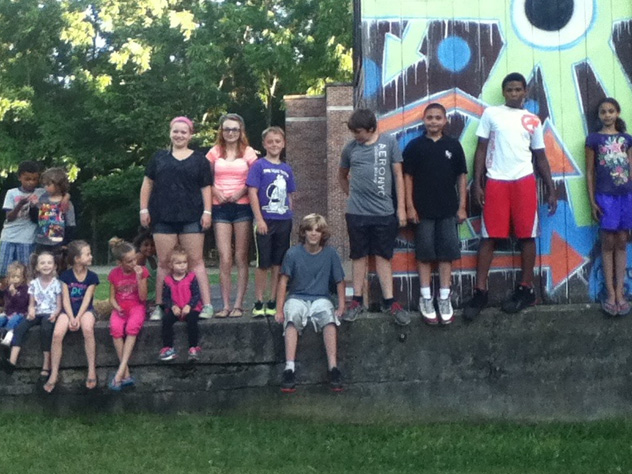 When summer winds down, when temperatures fall and the distinct smell of autumn infuses the air, we at the Huss Project find ourselves in a time of reflection. Summer is our busiest time of the year, and this past summer was our busiest yet!

We kicked off the season by screwing together a cadre of picnic tables, for which we hosted a picnic table building workshop. Not only did this allow us the opportunity to provide some education for anyone interested, but it furnished Huss with eight solid tables that we put to good use throughout the entire summer.

Some of that use materialized when free lunches for neighborhood kids began its annual reappearance. In all, we helped serve over 700 lunches to local students in the Huss neighborhood with some tasty lunches provided by Three Rivers Community Schools.

Speaking of food, did you know that this was our most prolific year of gardening at the Huss Project? Not only did we produce more food than ever before, but we expanded the garden and had more volunteer help than ever before. We are poised now to take our food production to new heights, continuing to provide local relief organizations and our Huss neighbors with fresh produce. Though we were troubled by a touch of vandalism this year, our resolve to be a food hub in the Huss neighborhood is stronger than ever.

We’ve already started some of this food distribution work through our table at the Three Rivers Farmers Market. This year, we partnered with four local farms — Corey Lake Orchards, Sustainable Greens, Bair Lane Farm and White Yarrow Farm — and brought vegetables from the Huss garden to fully stock our table with fresh, local produce. The summer went so well that we decided to open a temporary Downtown Harvest Market after the farmers market closed at Labor Day. We’ll be open every Saturday in September and October, 9:00am to 1:00pm.

We also hosted one of our semi-regular Underground Supper Club fundraisers in June in a storefront in downtown Three Rivers, raising over $1,700 for our continued work at the Huss Project. We plan to continue hosting these themed dinners in interesting locations soon; please contact us if you’d like to  be added to our invitation list.

Occasionally, we would take “breaks” from our toiling. On Wednesday nights we hosted Community Fun Nights, formally informal times for local folks to come to Huss for snacks, games and crafts — and our attendance this year was bigger than ever. On one night in July, we had over 60 people wandering the Huss grounds, which made for one heck of a kickball game!

Another soul-healing break for us came in the form of our Storytelling Nights. This year, we hosted four such nights, featuring themes like Local Haunts and Books, and some of the stories this year were enough to make grown men cry (as evidenced by seeing some very grown men with some very real tears on their faces). Storytelling has become more than a tradition at the Huss Project; storytelling is something that is worked into the very fabric of our community.

The pinnacle of every summer always comes with the beautiful chaos that is Huss Future Festival, a collaboration of community building, creativity, and just a bunch of fun. This year’s Festival saw us partnering with the Three Rivers Area Faith Community (TRAFC) to hand out over 300 backpacks to students in the county,  raising over $2,000 for The Huss Project, and celebrating our fifth anniversary at Huss with a raging five song dance party.

Now we find ourselves looking back on a summer well spend, with relationships strengthened and progress happening on that old building that we’ve all come to love so much. We don’t know exactly what the future has in store for the Huss Project, but in many ways our vision has never been clearer, and we have so many of you to thank for helping refine that vision over the course of this seemingly brief three months. We’ve only just begun.