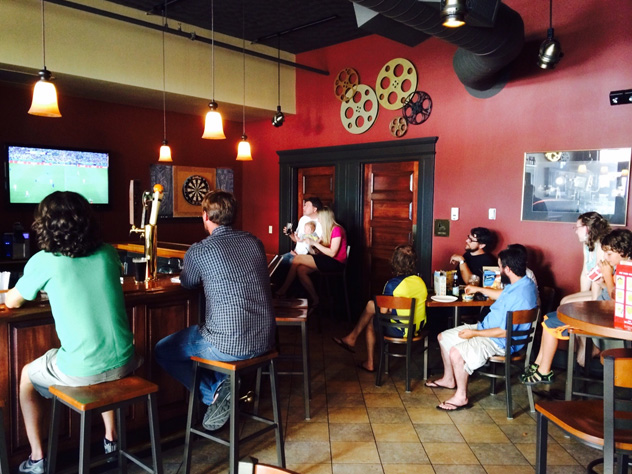 Our latest night of storytelling magic centered around the theme of local haunts. At first, there was confusion about what this meant. Were we telling ghost stories in August? The intended theme of the night was meant to inspire folks to tell stories about meaningful places in their lives, places that they would return to again and again. The term likely became a term because of the relationship between memories and ghosts. What are memories but thoughts that haunt us, that may rattle their chains when we least expect it, that are summoned unbidden for good or ill?

Were memories of a young man’s childhood home not reminiscent of ethereal visions, phantom children running through wooded trails and fields full of vegetables?

Were not several of the nights’ stories about now-abandoned stores, where all that remain are rock solid memories of tattooed baristas and strong-willed shop owners?

Are not memories of an alcoholic father every bit as unsettling as misty visions seen from the corner of an eye?

At the end of the night, it was clear that we had told both ghost stories and stories of local haunts, and even now our storytelling hall, the old Kindergarten Room at Huss, echoes with the voices we uplifted between those walls.

Our next storytelling night — September 12 at 7:00pm — will be less ambiguous because it’s all about food. We all eat, and we all love food. As a special treat, The Huss Project will partner with White Yarrow Farm and its Three Rivers Community Supported Agriculture (CSA) members for this night of good food and good stories. It’s bound to be a fitting send off to what has been an incredible summer of stories. See you there!

Above: Friends watch the World Cup Final at a favorite local haunt in Three Rivers, Michigan.