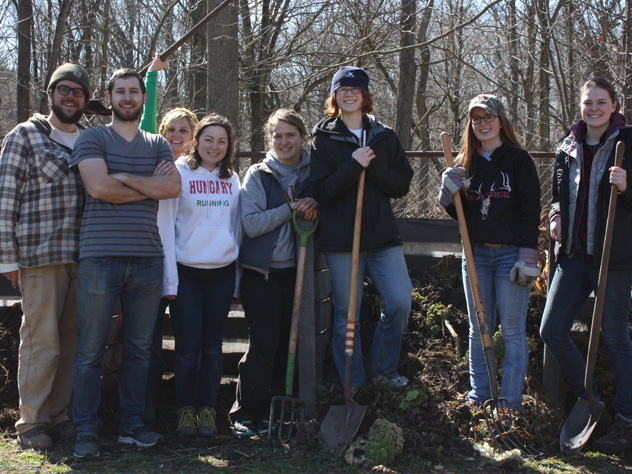 “How many metal ceiling tiles can I carry in one load?” and “I didn’t imagine when I woke up this morning that I would be shoveling manure” were just some of the things you would have heard at the Huss Project last week when we were joined by five Calvin College students on a service learning spring break trip. Every morning, the students arrived at the Huss Project bright and early, ready for anything.

Monday, students worked in the old Huss gymnasium, aiding in the continued transformation of the space into a wood shop. This week’s goal was to remove the old ceiling tiles and build some shelving for storage in the large room. Everyone jumped into the work, building scaffolding and clearing space for the ceiling work to begin. Soon, tiles were quickly falling from above. They soon realized that the lighting was also coming down and the room was becoming very dark. One student got right to work assembling work lights in the light of day so by the end of the morning, students were able to have enough indoor lighting to continue their work for the rest of the week.

Outside, more students worked to clean up the garden space and prepare for the coming growing season. They started by harvesting orange and purple winter carrots, which was a great way to kick off the spring. Next, they moved on to pulling out other plants that were sticking out of the soil, ready to be composted. They had no problem sticking their hands into the wet soil and getting pretty muddy to get the job done. They also worked hard to clean up the blacktop, discarding some old irrigation tape and moving manure into the compost bins.

Tuesday, work continued both inside and out. You may have seen a very large metal recycling bin outside of the Huss Project and it was ready to be filled. As old soul and Motown music wafted out from the old gym, students got going with wheelbarrows, bringing the recyclable metal from the ceiling tiles and rails outside to the large dumpster. Meanwhile, outside students were continuing work cleaning up garden beds, raking, pruning, and cutting back wily herbs that already smell delicious.

By the start of the workday on Wednesday, the ceiling tiles had been fully moved from ceiling to floor and that old gym space was looking like a dimly lit construction site. The students worked together to separate the metal from the fiberglass in each tile and continue bringing them out to the dumpster to be recycled. Without discussion, the students worked together as if they had been doing this work for years. Each saw a need and began either separating the elements, stacking tiles to be moved, wheeling the metal outside, or helping to toss the contents into the bin. Even though everyone was wearing safety masks, workers exchanged smiles and kind words as they passed one another. Everyone worked so well that a few students could even begin work on an extra project, organizing a craft and tool storage room.

Thursday came quickly and when the students arrived at the Huss Project on the last morning of work, they commented on how fast the day had come. When they entered the building and saw all of the work that they had done though, they realized how much they had already accomplished in a relatively short amount of time. Students worked inside to finish up cleaning the new workshop area and building shelving. Others finished beautifully organizing the craft and tool storage area. Despite unexpected winds, many hands and good conversation helped to rake heaping piles of leaves that had built up and were pushing against the long fence along the front, back, and side of the building. Last, everyone took turns (literally) on shoveling the compost piles with the hope that the new fresh spring air will wake up some microbes in the soil. Everyone finished the day together with a quick game of basketball in the room that they had spent so much time that week, on to the next step of transformation.

We had a lot of fun working together throughout the week and we accomplished so much to get ready for another summer of programming at the Huss Project!