We asked friends, neighbors, and community partners to give us their ideas for the brand-new Imaginarium once it’s completed. Here’s what Anna Smith said:

Where in Three Rivers is someone likely to spot you, and what would you be doing there?

There a couple of places I have been spending most of my time lately: The Three Rivers library and the St. Joseph County Historical Society, doing research for “The History and Mystery of Three Rivers” articles I have been writing. Also, I attend Library Board meetings and City Commission meetings on a regular basis. It’s important to know the past (our roots) and the present (the foundation for the future).

What is your connection to Huss?

I have always felt schools hold a community together. Different people come together for a common cause: the children, the future. It makes me sad to see these old buildings that were the pillars of dreams empty and forlorn.

Since I live a half block away, I see the building everyday and all the great things the Huss Project volunteers are doing with it, so I feel protective of it and their dreams for it and for the community.

I had a friend who went to school there and she talks about those fun days when we get together. I know the house on 8th Street that used to be a store where she got candy on the way home. Since she is getting older, I hear that one over and over. “Sweet memory” for her. Huss is my directional beacon for anyone who looks for anything in the area: “Find the school and go from there…”

Patti Wolgast was a teacher there. She was a Neff, Marilyn Miholer’s sister, so I knew her for many years through Neff’s Flower Shop. Patty and Jay ran the greenhouse on Adams Street (now an empty lot). I saw her kids grow up and one, Sarah, was born on my birthday. Might have been my 21st.

My stories of Huss would include taking Clancey, my baby goat, to visit Patti Wolgast’s class. As Clancey drank out of his bottle, little brown raisin-size things came out of the other end and bounced off the floor. Patti said,”Well, now he has done all of this tricks.” Also, I loved the fun and sense of community people were having when I was working the Save The Frogs booth at Huss Future Fests, and watching the children fellowship with each other during the lunch program and talking with them and their parents/grandparents when passing out Vacation Bible School fliers for Ninth St. Church.

One more memory: in the 1990s, the river flooded and I was First United Methodist Church secretary when I got a call from Mel Muffley (the secretary at Three Rivers High School) that someone needed to go to Huss School and get things ready until the Red Cross could get there as there was an expectation of area people who would need a place to go. I went and fixed a big kettle of “stone soup” and someone from another group came to see how many cots would fit in the gym. Red Cross showed up and took over so I don’t know how many people used the building, but Huss was ready for them.

The Huss Project is working on turning the old kindergarten room into a cool new space with floor-to-ceiling bookshelves and room for community events. What’s your most creative idea for something that could happen there?

Since I am working “in the past” so much, I have discovered people are interested in the who/what/where/when things and want to tell their story. So, I am thinking that a “Huss Heritage” remembrance area could be added to your project. It could be a wall of tributes: remembrances (letters, notes, report cards, pictures,etc.) of past students, lists of past teachers, PTA members, etc. (I have some). The St. Joseph County Historical Society in downtown Three Rivers has a school display (Kathy Brundige has done a great job collecting and cataloging area schools and she loves to share). This could be a room or a hall with different areas that people could “share, show, and sponsor” with their donations of material and money. The money could go toward refurbishing/building this “living museum” area. Past, present and future could all come together to be viewed by the present and future generations as they stroll the halls or in a room of contemplation. I run into many people who say “I remember when…”. I think you would touch another group of people who would share your dream (and give) if they knew what the dream was and they could help make it happen. I would pay to have my ‘A’ report cards seen by others instead of sitting in a drawer/box somewhere (if I had gone to Huss).

This idea is somewhat similar to buying a brick for a memorial walk or as Three Rivers did many years ago when they wanted to build a new Chamber of Commerce building (was Neff’s Flower Shop on W. Michigan for a while). I own a brick in that building! 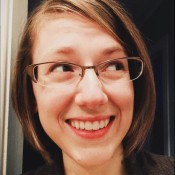 Deborah is a core community member of *culture is not optional and works at the Three Rivers Public Library.