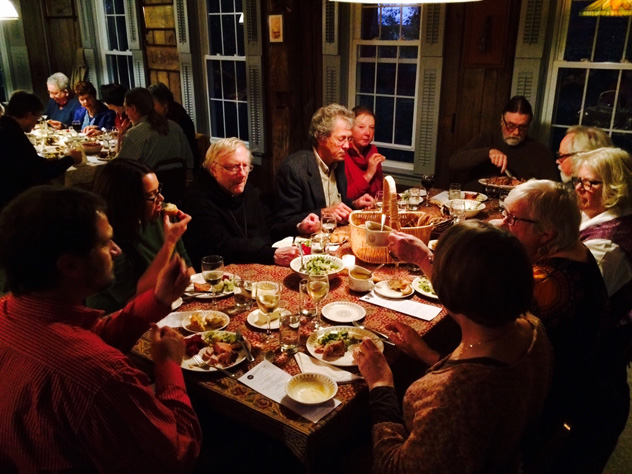 People keep telling us that we should start a restaurant. To quote one satisfied Supper Club attendee, “You guys are the best restaurant in Three Rivers!” Even said glibly, this is a comment that has stuck with us. We would never sell short the efforts of those restauranteurs already established in our fine city, but it’s hard to argue that something is missing from the food landscape of Three Rivers. In some ways we are incredibly well-suited to filling that gap. We make good food, source it as locally as possible, and serve it in a genuinely affirmative manner. We love doing this, and hopefully that is apparent.

On Saturday, October 25, we did it again, inviting local folks to St. Gregory’s Abbey, decorating an old farmhouse in fall colors, and filling bellies with warm autumn fare. It’s true that our intent with these Supper Clubs is to raise money, but there are times when it feels like we would do it regardless of whether or not we made a dime. That’s a moot point right now because we have so many amazing supporters that we consistently raise money that is then poured directly back into The Huss Project. In fact, we were able to raise over $1,500 at October’s Supper Club!

Our fall colors supper club was colorful indeed. We began with a golden-orange winter squash soup, topped with a spiderwebbed crème fraîche. The main course consisted of a slow roasted, cured ham that practically melted on the tongue topped with an orange bourbon raisin sauce, served with a burgundy colored beet and potato mash, and a green and white Brussels sprouts and cauliflower medley topped with caper mustard, all accompanied by a challah bread that one guest exclaimed was “better than Zingerman’s.” For dessert, we brought out a work of art in apple-cranberry tart form with cinnamon rooibos ice cream on the side.

Sounds good? It was.

We’ll do it again next year, with thoughts of what a destination restaurant could look like in Three Rivers. Feel free to imagine with us and contact us if you’d like to be added to our Supper Club invitation list.