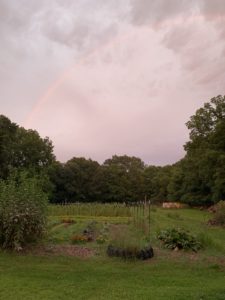 The Huss School property has been home to several notable structures and monuments previous to the current building’s inception. One of the first cemeteries in Three Rivers is believed to have been located near 8th Street and Broadway. According to sources, this cemetery was used while Three Rivers was still being settled, and most of the bodies that rested there were moved after the creation of Riverside Cemetery. While the cemetery is believed to still hold some bodies, there is a very small amount of recorded information about it, which includes a quote attributed to George Buck, the founder of Second Ward.

Old cemeteries are not the only thing associated with the site. Since Second Ward’s inception as Lockport, the site of Huss School has always been home to a neighborhood-based educational center.  After founding Lockport, George Buck maintained a small, one-room cabin for the local children’s education around the spot where Huss now stands. In time, this building expanded to a four-room building, and then to a brick building, called the Union-Lockport School. The Union-Lockport School, so called to differentiate between it and another Three Rivers school named Union, was Huss’ immediate precursor. Union-Lockport was built around 1868. The school, a brick, two-story building, was small compared to Huss, but housed a greater range of students, from kindergarteners through tenth grade. During its existence, the Union-Lockport school had several additions made to accompany the tremendous growth experienced in the school system in the late nineteenth century. Union-Lockport existed as the Second Ward School until January 28, 1918, when a fire originating in the school’s basement burned the school down.