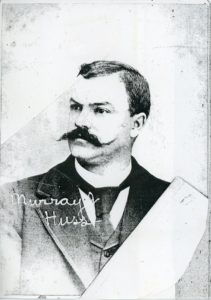 Murray J. Huss, the school’s namesake, was the president of Three Rivers board of education in 1909, and served for a total of 24 years. The school is named after Mr. Huss for his exceptional service as board president. Originally from Sandusky County in Ohio, Mr. Huss made Second Ward in Three Rivers his home, and lived several blocks north of the school named after him. Mr. Huss worked for Sheffield Car Company, and continued working with them after it became Fairbanks, Morse, & Company. Mr. Huss was a devoted member of his community, deeply investing himself in everything he did. Besides serving as president of the local board of education, Mr. Huss participated on the local library board and was a member of the Knights of Pythias. Mr. Huss was also a committed member of his church, St. John’s Lutheran, where he served as the Sunday school superintendent.

Mr. Huss’ family is also notable. His wife, Marian Booth Buck, was descended from George Buck, the founder of Lockport. His twin sons, Willard and Warren, played a role in World War I as ambulance drivers for the French forces. Correspondence from the Huss twins can be read in the Michigan Room at the Three Rivers Public Library. Mr. Huss passed away on June 3, 1927, a year after he retired from his work. The school was named after him posthumously in 1932.